In 2004, A. Zychlinsky et al. described the phenomenon of neutrophils neutralizing pathogenic microorganisms through extracellular structures called “neutrophil extracellular traps” (NETs). Since the neutrophil dies during the formation of the traps, the mechanism of their production was named NETosis, similar to apoptosis and necrosis [1].

In preeclampsia, reduced placental perfusion is associated, among others, with an increased release of inflammatory membrane microparticles of syncytiotrophoblast microvilli and cytokines in response to primary hypoxia caused by initially impaired trophoblast invasion. Increased blood levels of syncytiotrophoblast microvilli have been found in patients with preeclampsia. Studies have shown that syncytiotrophoblast microvilli destroy endothelium and inhibit endothelial cell proliferation in culture as well as endothelium-dependent relaxation of small arteries in vitro [15–18]. Inadequate placental perfusion in preeclampsia has been suggested to produce reactive oxygen species, which are inducers of NETosis. As a consequence, a vicious circle develops where initial hypoxia caused by malformation of spiral arteries and related oxidative stress induces neutrophils to form traps, which aggravate abnormal placental blood flow by increasing hypoxia and oxidative stress [5, 19–23].

Severe pre-eclampsia is characterized by rapid progression of clinical manifestations and such complications as intrauterine fetal growth delay (8–20%) [24], premature placental detachment [25], eclampsia (8%) [26], HELLP syndrome (4–12%) [27]. This complication ranks fourth among the causes of maternal mortality [24]. Preeclampsia results in over 70,000 maternal and 500,000 intrauterine/neonatal deaths annually worldwide [28]. When severe preeclampsia manifests as isolated thrombocytopenia, timely diagnosis and ruling out other types of thrombocytopenia, especially very common gestational one, are necessary.

Currently, the diagnosis of severe preeclampsia is made based on typical clinical and laboratory presentations. However, an atypical manifestation of the disease can reduce the awareness of preeclampsia, prompting the physician to diagnose gestational thrombocytopenia. This approach can lead to inappropriate patient management and result in major complications of preeclampsia. It is difficult to confirm or rule out pre-eclampsia in its early stages without a typical clinical presentation, even if the clinician is alert.  Diagnostic markers of early pre-eclampsia, such as the sflt-1/plgf ratio, are not readily available in routine clinical practice [29]. Overdiagnosis of this complication entails unwarranted polypharmacy and interventions, including premature delivery, which are not necessary in gestational thrombocytopenia. On the other hand, there are currently no strict diagnostic criteria for gestational thrombocytopenia and this diagnosis is usually made after ruling out the other possible conditions. Gestational thrombocytopenia is physiological in nature and usually does not associate with coagulation disorders nor requires any intervention and subsides after delivery [30,31].

Thus, there is currently no available screening method for differential diagnosis of early severe preeclampsia and other conditions associated with thrombocytopenia, including gestational one.

The objective of the study was to evaluate the value of NETs assessment in the differential diagnosis between preeclampsia and gestational thrombocytopenia.

This comparative prospective clinical study of the venous blood levels of NETs in patients with severe preeclampsia, gestational thrombocytopenia, and healthy pregnant women was performed at the Vidnoye Perinatal Center (Fig. 1). The patients were assigned to 3 study groups. The sample size was estimated using the relevant determination tables [32].

Figure 1. Flow chart of comparative prospective clinical study on the measurement and comparison of the NET level in the venous blood of patients with severe preeclampsia, gestational thrombocytopenia and healthy pregnant women 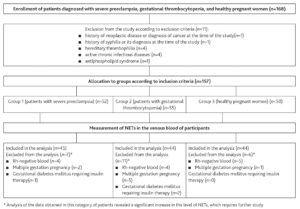 In order to quantify the level of NETs, the venous blood was collected from patients in the II–III trimesters of pregnancy in RusTech and PUTH general blood test tubes with EDTA. Later, a blood smear with a dense monolayer of cells was made within 1.5 hours of the sampling and examined according to the technique described in Russian patent No. 2121297 “Method for determining the percentage of NETotic phagocytes” using a smear making device (Medtekhnopark LLC). The method consists in sliding the edge of the top slide on the working surface of the bottom slide to produce a uniform blood smear one layer of red blood cells thick with the red blood cell density of 4-15 thousand per mm. For this purpose, 2 µl of sampled blood was used, the smears obtained were stained using Giemsa stain. Quantification of NETs generated by NETotic blood phagocytes was performed using the MECOS-C2 automated microscopy complex (MECOS CJSC) and synthetic immersion oil (Minimed LLC).

All analyzed data were checked for normality of distribution. In normal distribution, parametric criteria were used for description such as mean and standard deviation. Analysis of variance and Student’s t-criterion were used for comparative analysis of the studied groups in this case. If data distribution was non-normal, the results were presented as median (M) and 1st and 3rd quartiles (Q1-Q3) and Kruskal-Wallace and Mann-Whitney U-tests were used for comparative analysis. Pearson’s χ2 test was used to analyze the qualitative data. Differences were considered significant at P value <0.05. Statistical analysis was done using Statistica 10 software (StatSoft Inc., USA).

This study was approved by the ethical committee of the V.A. Negovsky Research Institute of General Reanimatology, Moscow (protocol no. 2/20/3, dated June 10, 2020).

Table 1. Characteristics of the studied groups

Most common comorbidities in the study participants included genitourinary and endocrine disorders (including overweight and obesity), and mild anemia. Prevalence of endocrine diseases, overweight and obesity in group 1, which accounted for 40.3% of the total comorbidity, is consistent with the published data on increased risk of preeclampsia in patients with these conditions [35–,37] (Table 2).

Table 2. Comorbidities and their frequencies in the studied groups

The differences in the number of patients in the groups and comorbidities were due to several concomitant diseases in some patients.

Thus, the intergroup differences in specific comorbidities and their frequencies are due to high incidence of endocrine diseases and overweight/obesity.  According to current concepts, overweight and obesity, while being risk factors for preeclampsia, do not play a significant role in the pathogenesis of this pregnancy complication and could not affect the results of this study [35,36,37].

The levels of NETs in the study groups are shown in Table 3.

The analysis of variance revealed significant intergroup differences in NETs levels (p = 0.003). In a pairwise comparison of groups using Student’s t-criterion, group 1 (patients with preeclampsia) had significantly higher NETs than group 2 (gestational thrombocytopenia) (p = 0.002). Comparison of the preeclampsia group values with those of healthy pregnant women (group 3) also revealed significant differences (p = 0.001). The levels of NETs did not differ between groups 2 and 3 (p > 0.05, Student’s t-test).

The increase in NETs in preeclampsia found in this study is in accordance with previously published data. Similar results were obtained by A.K. Gupta et al. who showed that both microvilli of syncytiotrophoblast and soluble placental factors in vitro activate neutrophils to generate NETs. They also revealed that the traps were capable of ensnaring not only large objects, such as bacteria (>2 μm), but also very small (<200 nm) particles, such as microvilli of syncytiotrophoblast. In preeclampsia, the number of NETs in the placenta was significantly higher than in the placenta of healthy pregnant women [20].

Epithelial and endothelial dysfunction in preeclampsia may also be associated with increased levels of NETs, as shown by M. Saffarzadeh et al. who demonstrated a direct toxic effect of NET components on endothelium [38].

On the other hand, the absence of differences in NETs levels between the patients with gestational thrombocytopenia and women of the control group once again indicate the possible physiological nature of the former, also characterized by lack of severe endothelial damage and absent massive consumption thrombocytopenia in contrast to preeclamptic thrombocytopenia.

However, the limited knowledge on this issue warrants larger-scale studies to determine the reference values of the NETs levels in healthy pregnant women in relation to gestational age and compare them with the ones of non-pregnant healthy subjects.

This website uses cookies to improve your experience while you navigate through the website. Out of these cookies, the cookies that are categorized as necessary are stored on your browser as they are essential for the working of basic functionalities of the website. We also use third-party cookies that help us analyze and understand how you use this website. These cookies will be stored in your browser only with your consent. You also have the option to opt-out of these cookies. But opting out of some of these cookies may have an effect on your browsing experience.
Necessary Always Enabled
Necessary cookies are absolutely essential for the website to function properly. This category only includes cookies that ensures basic functionalities and security features of the website. These cookies do not store any personal information.
Non-necessary
Any cookies that may not be particularly necessary for the website to function and is used specifically to collect user personal data via analytics, ads, other embedded contents are termed as non-necessary cookies. It is mandatory to procure user consent prior to running these cookies on your website.
SAVE & ACCEPT