INTRODUCTION. The postoperative period during strabismus surgery in children is often complicated by pain syndrome of different intensity and postoperative nausea and vomiting (PONV), which negatively affects postoperative rehabilitation. Intraoperative regional techniques have a sufficiently high analgesic profile, which serves as a justification for their use. Subtenon blockade refers to minimally invasive interventions. OBJECTIVES. To evaluate the efficacy of subtenone blockade for postoperative anesthesia of children after strabismus surgery. MATERIALS AND METHODS. A single-center open randomized controlled prospective longitudinal study was conducted in parallel groups. Group 1 — 36 patients, acetaminophen 1.5 mg/kg was used for postoperative anesthesia; Group 2 — 38 patients, a subtenon blockade was performed at the end of surgery. The main indicators of hemodynamics at the stages of the study, the level of cortisol and the redox coefficient, the level of pain and the frequency of PONV were taken into account. RESULTS. After surgery, patients reported of pain of different intensity 4 hours after surgery: Group 1 — 66.6 % of patients, Group 2 — 5.2 % of patients. PONV was present in 6 (16.6 %) patients of Group 1. There were no PONV in Group 2. The cortisol level in the group with subtenon blockade after 4 hours was 32 % lower (p ˂ 0.05) than in patients of the 1st group. In Group 2, the FORT/FORD coefficient significantly increased 4 hours after surgery from 0.45 ± 0.5 to 0.62 ± 0.2 (p ˂ 0.005). CONCLUSIONS. The use of subtenone blockade in strabismus surgery at the end of the operation allows to achieve pronounced and prolonged analgesia, to limit the manifestation of PONV in the postoperative period, as well as to limit the level of surgical stress in general, which in turn reduces the degree of inflammatory reaction of the eye.

Pediatric anesthesia is the main component of a child’s recovery after surgical treatment [1]. Regional anesthesia, according to the recommendations of 2016, is a component that improves postoperative anesthesia [2]. Regional methods of anesthesia in ophthalmology have certain risks, such as hemorrhages in retro- and peribulbar blockades [3, 4], eye perforation [5]. Subtenone blockade refers to less invasive interventions with a sufficiently high analgesic profile, which serves as a justification for its intraoperative use in cataract surgery and some operations on the posterior parts of the eye [6–8]. Subtenone blockade is used in pediatric surgery in strabismus for intraoperative anesthesia [9].

Postoperative period in this type of surgical intervention is known to be characterized by pain syndrome of varying intensity and postoperative nausea and vomiting (PONV), which negatively affects the rehabilitation of children [10]. Postoperative anesthesia in children has certain limitations associated with the use of drugs due to early age [11]. At the same time, preventive or proactive anesthesia by performing a subtenon blockade with an extended-acting anesthetic at the end of surgery creates a long-term analgesic effect as an alternative to parenteral treatment of pain syndrome.

This study is aimed at evaluating the efficacy of subtenone blockade for postoperative anesthesia in children during strabismus surgery.

A prospective single-center open randomized-controlled longitudinal study was conducted in parallel groups. The study was conducted in accordance with the Helsinki Declaration (2013) and approved by the Ethics Committee of the Irkutsk branch of S. Fyodorov “Eye Microsurgery” Federal State Institution of the Ministry of Health of the Russian Federation (Protocol No. 4-B, 04.02.2020).

74 children were included in the study from January 2020 to January 2021. Group 1 — 36 patients, Group 2 — 38, the groups were comparable in terms of surgical intervention. The surgical treatment method involved a recession of one or two muscles in one eye. The distribution of patients by sex and age, body weight and status according to the American Society of Anesthesiologists had no statistically significant differences (p > 0.05) (Table 1).

All patients underwent strabismus surgery with recession and muscle resection. All operations were performed by one surgeon. Depending on the method of anesthesia at the end of the operation, the patients were divided into two groups:

A random distribution was sequentially numbered for the participants and sealed opaque envelopes identifying the control group or comparison group were generated by the computer.

Patients’ demographic data including age, body weight, gender, were documented before surgery. During the surgical intervention, pulse oximetry was performed in all patients with saturation measurement (SpO2), hemodynamic parameters. General anesthesia for all patients was performed according to a single method and included premedication with midazolam 0.1–0.25 mg/kg IV. All patients underwent general inhalation anesthesia according to the method of Volatile Induction and Maintenance of Anesthesia (VIMA). The induction was carried out with sevoflurane with the installation of a laryngeal mask of the appropriate size (sevoflurane at a dose of 2.2–2.5 vol % (minimum alveolar concentration (MAC) 1.0–1.2), with preserved spontaneous breathing). All patients underwent subtenon anesthesia with lidocaine 2 % — 2.0 ml after induction (Fig. 1, a).

The technique of subtenon blockade included surgical access to the subtenon space and the introduction of a blunt cannula into the lower nasal quadrant, followed by the introduction of a local anesthetic. 36 patients of Group 1 were injected with acetaminophen 15 mg/kg at the end of surgery, 38 patients of Group 2 — subtenon blockade was repeated with 0.5 % solution of ropivacaine — 3.0 ml (0.57 ± 0.03 mg/kg) (Fig. 1, b).

The values were recorded at the following stages:

In order to assess the stress response, the cortisol concentration in blood was determined by the enzyme immunoassay on the device “Bio-tek instruments inc. El × 800” (USA), the level of 101.2–535.7 nmol/L was taken as the norm. Assessment of oxidative stress (Free Oxigen Radicals Testing (FORT) — in mmol/L) norm up to 2.31 mmol/L and total antioxidant capacity (Free Oxigen Radical Defens (FORD) test in mmol/L) norm 1.07–1.53 mmol/L in whole blood samples was carried out using the FORM Plus CR analyzer 3000 (“Salegary”, Italy), after which an integral indicator was calculated in the form of a redox coefficient (FORD/FORT). Blood sampling was carried out at the following stages:

The pain intensity was assessed according to a 4-point verbal rating scale (VRS), where 1 — no pain; 2 — weak pain; 3 — moderate pain; 4 — strong pain. Verbal rating scale is more convenient for visually impaired patients who have difficulties with graphic tools. Pain assessment was carried out in the intensive care unit (2 hours after surgery, when the patient woke up and could answer questions), 4 hours after surgery. The frequency and degree of PONV were recorded in points: 0 — the absence of PONV, 1 — the presence of nausea, 2 — nausea with the urge to vomit, 3 — single vomiting, 4 — repeated vomiting.

Assessment of the inflammatory reaction degree on the first day after surgery was carried out by the ophthalmologist. To compile a report on the results, a block diagram of the study was used (Fig. 2) [12]. 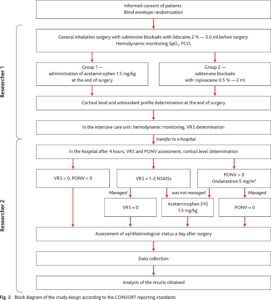 The hemodynamics study results during surgery showed that despite the use of various methods of postoperative anesthesia, the functional state of the cardiovascular system at various stages of the study did not exceed the permissible values and had no significant differences in the groups (Fig. 3, a, b). Postoperative evaluation (2 hours after surgery) on the VRS showed the presence of pain syndrome in Group 1 in 5 (10 %) patients (VRS = 2 points), which required the appointment of analgesics. No pain was recorded in the second group.

The correlations study between the redox coefficient and the pain level demonstrated the expected negative relationship between these indicators, closer in patients of Group 1 (r = −0.75, p = 0,000) (Fig. 5, a, b).

Summary of the main study result

The use of subtenone blockade at the end of surgical treatment for strabismus surgery in children allows creating optimal conditions for the course of the early surgical period due to prolonged anesthesia, reducing the frequency and severity of PONV. Regional blockade protects the body more completely from surgical aggression in comparison with parenteral postoperative anesthesia, leading to a less pronounced endocrine-metabolic response, which is the basis for the occurrence of an inflammatory eye reaction.

Discussion of the main study result

The use of regional blockades in surgery makes it possible to reduce the drug analgesic load in the postoperative period both in general surgery and in ophthalmic surgery [13, 14]. As one of the minimally invasive regional techniques, Subtenone blockade is widely used in pediatrics, [15]. The use of ropivacaine in subtenone blockades as an extended-acting anesthetic in the treatment of strabismus is reflected in the work of Walters G. (2001) [16].

The use of subtenone blockade for analgesia in strabismus surgery in children according to Tuzcu K. (2015) has an analgesic effect only in the first 2 hours after surgery [9]. In this regard, pain syndrome in the postoperative period requires treatment, which sometimes causes the occurrence of PONV [17].

It is known that in addition to opioid anesthesia in the surgical treatment of strabismus, the PONV-initiating factor is the traction of extraocular muscles, which induces oculogastric and oculocardial reflexes [18].

The mechanism of these pathological reflexes is based on the presence of numerous peripheral collaterals and anastomoses of nerves, adjacent localization of the nuclei of the trigeminal, lingopharyngeal and vagus nerves in the medulla oblongata and reticular formation [19]. Most of the published articles are devoted to the use of antiemetics for the treatment of PONV [20]. Regional anesthesia reduces the risks of pathological reflexes due to the blockade of afferent impulses from the area of surgical intervention.

The data obtained indicate adequate antioxidant protection of patients with the use of subtenon blockade at the end of surgery, since the ratio of the total concentration of antioxidants to the total concentration of free radicals demonstrated a significant elevation after surgery. In turn, a strong negative correlation was established with the indicators of the level of pain along the suture and the level of oxidative stress after surgery in patients of the first group (r = −0.75, p = 0.000). It is known that pain is one of the pathogenetic factors of oxidative stress, and anesthesia of a sufficient level has an antioxidant effect [21]. Regulation of the redox balance by modulating the levels of reactive oxygen species and antioxidants at a non-toxic level in wound tissues can improve healing [22]. The results of the presented study demonstrated a decrease in the level of inflammatory reaction of the eye 1 day after surgery in the group with subtenon blockade.

The use of subtenon blockade in strabismus surgery at the end of the operation allows achieving pronounced and prolonged analgesia, to limit the manifestation of PONV in the postoperative period, as well as to limit the level of surgical stress in general, which in turn reduces the degree of inflammatory reaction of the eye.

Ethics approval. This study was conducted in accordance with the Helsinki Declaration (2013) and approved by the Ethical Committee of Ethics Committee of the Irkutsk branch S.N. Fyodorov Eye Microsurgery State Institution, Irkutsk, Russia (reference number: 4-B-04.02.2020).

This website uses cookies to improve your experience while you navigate through the website. Out of these cookies, the cookies that are categorized as necessary are stored on your browser as they are essential for the working of basic functionalities of the website. We also use third-party cookies that help us analyze and understand how you use this website. These cookies will be stored in your browser only with your consent. You also have the option to opt-out of these cookies. But opting out of some of these cookies may have an effect on your browsing experience.
Necessary Always Enabled
Necessary cookies are absolutely essential for the website to function properly. This category only includes cookies that ensures basic functionalities and security features of the website. These cookies do not store any personal information.
Non-necessary
Any cookies that may not be particularly necessary for the website to function and is used specifically to collect user personal data via analytics, ads, other embedded contents are termed as non-necessary cookies. It is mandatory to procure user consent prior to running these cookies on your website.
SAVE & ACCEPT
Insert math as
Block
Inline
Additional settings
Formula color
Text color
#333333
Type math using LaTeX
Preview
\({}\)
Nothing to preview
Insert