Over the past 10 years, the approach to the problem of labor pain relief has changed significantly. The development of regional methods of anesthesia, as well as significant side effects and lack of effectiveness of narcotic analgesics, have led to the fact that epidural anesthesia has become the “gold standard” for labor pain relief [1]. The basis for this was the ability to effectively affect all parts of the pathways from the nociceptors involved during childbirth. At the same time, despite obvious advantages of epidural anesthesia in childbirth, such as controllability, high-quality analgesia, lack of effect on the fetus, its use is impossible in some situations, such as thrombocytopenia, coagulopathy and a number of other conditions. The steady increase in the number of pregnant women with comorbidities, in which the installation of an epidural catheter is contraindicated, requires the development of an additional standard for labor pain relief in such women.

Objectives of this review was to summarize the available data on alternative conduction methods of labor pain relief.

We synthesized data on the use of paracervical block, pudendal nerve block, bilateral paravertebral block, quadratus lumborum block (QLB), and erector spinae plane block (ESPB) for labor pain relief. A search was made for articles on conductive methods of labor pain relief in the Pubmed, EMBASE, eLibrary.ru and Сochrane Library databases, published in the period from 1982 to 2021. The search keywords were pudendal nerve block, paracervical block, paravertebral block, quadratus lumborum block, erector spinae plane block, anesthesia of childbirth. Literature data search was carried out by two researchers. In the event of disagreement regarding the inclusion of an article in the review, a decision on a particular article was made collectively with the participation of the entire team of authors. The study was performed in accordance with the PRISMA (Preferred Reporting Items for Systematic Reviews and Meta-Analyses) international guidelines for writing systematic reviews and meta-analyses [2]. During the second stage, the authors reviewed abstracts of articles and excluded publications that did not meet the study criteria. Criteria for inclusion in the review are presented in Table 1.

Table 1. Criteria for inclusion in the systematic review

During the third stage, the text of selected articles was analyzed in terms of compliance with the inclusion criteria and the list of references for the presence of relevant studies (Fig. 1). 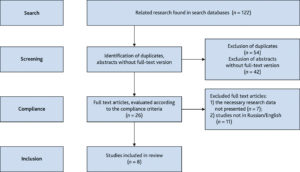 A summary of the studies included in the review is presented in Table 2.

Table 2. Characteristics of the included studies

Assessing the risk of study bias

Each article included in the review was assessed for study bias, which was performed independently by three authors, and a final decision was made based on the results of a joint discussion. The parameters and results of the assessment are presented in Fig. 2 and Table 3.

Fig 2. Summary assessment of the risk of systematic errors

As can be seen from Table 2, the review included articles on paracervical nerve block, pudendal nerve block, bilateral paravertebral block, erector spinae plane block, and bilateral quadratus lumborum block. Women’s satisfaction with the quality of analgesia after performing the above blocks is described in Table 4 and their possible complications are presented in Table 5.

Table 4. Evaluation and comparison of the effectiveness of anesthesia methods

Table 5. Complications described in the studies

In works devoted to the use of paracervical blockade for labor pain relief, it was shown that the introduction of a local anesthetic into the submucosal layer of the vaginal fornix lateral to the cervix allows blocking the paracervical ganglion, which provides anesthesia for the uterus and its cervix. This block is effective for relieving pain during uterine contraction, but it does not affect sensitive afferent fibers coming from the perineum. Thus, this block is not effective in the second stage of labor. The literature describes such complications and side effects as fetal bradycardia, systemic toxicity of local anesthetics, infection, and postpartum neuropathy [3–5]. A study with 198 women showed that paracervical blocks using 2% lidocaine solution were more effective than placebo (relative risk [RR] 32.31; 95% confidence interval [95% CI] 10.60–98.54), at the same time, after performing paracervical block, such side effects on the part of the fetus as transient bradycardia were more often noted, and on the part of the mother — dizziness, sweating and tingling in the lower extremities [3]. Two other studies compared the use of paracervical block and narcotic analgesics for labor pain [4, 5]. E. Nikkola et al. (2000) conducted a randomized study comparing patient-controlled intravenous fentanyl with paracervical block (10 ml 0.25% bupivacaine) for labor pain relief [4]. The study was terminated after the participation of 12 women, as one newborn in the fentanyl group experienced a significant decrease in peripheral oxygen saturation to 59%, which required the administration of naloxone. Episodes of neonatal desaturation (oxygen saturation level less than 90%) were more frequent in the opioid group compared to the paracervical block group. Mean and maximum neonatal heart rates, in addition to measures of neonatal neurologic and adaptive capacity, were lower in the opioid group. F. Jensen et al. (1984) conducted a randomized, double-blind study comparing the efficacy of paracervical block (12 ml of 0.25% bupivacaine) with intramuscular administration of 75 mg pethidine for labor pain relief. The authors showed that satisfaction with analgesia was higher in the group of women who underwent paracervical block compared with the group of women who received pethidine for pain relief (odds ratio [OR] 2.52; 95% CI 1.65–3.83) [5]. Similar conclusions were reached by the authors of a Cochrane review aimed at establishing the efficacy and safety of paracervical block for labor pain relief by combining data from the above studies [6]. It has been shown that paracervical block compared with opioids did not lead to an increase in the frequency of operative vaginal delivery (OR 1.02; 95% CI 0.56–1.87) or caesarean section (RR 0.23; 95% CI 0 .03–1.87). None of the newborns had an Apgar score less than 7 at 5 minutes postpartum [4, 5]. The difference in need for additional analgesia between the group in which women underwent paracervical block and the group in which women received opioids for pain relief in the first stage of labor was not statistically significant (OR 1.73; 95% CI 0.54–5.50) [6]. Thus, the data obtained indicate that paracervical blockade provides more effective analgesia compared with placebo and narcotic analgesics during labor.

The erector spinae plane block (ESPB) was first described as a treatment for neuropathic chest pain. Subsequently, this block began to be used for pain relief in the cervical spine, after abdominal surgery and for pain in the lumbar region [27, 28]. This diversity of indications is explained by the distribution of local anesthetic after administration in the paravertebral and epidural spaces, both in the cranial and caudal directions, which causes both somatic and visceral analgesia in several segments [29]. With this block, the needle rests against the transverse process of the vertebra, the anesthetic is injected between the transverse process and the muscle the erector spina plane. In addition to its technical simplicity, the relative distance from the spinal canal may mitigate potentially serious complications associated with neuraxial techniques. However, the use of this blockade for labor pain relief has been little studied to date. The literature describes isolated clinical observations of the use of this block for labor pain relief. Only 4 cases of the use of erecter spinae plane block for labor pain relief have been described. Attention is drawn to the fact that after the implementation of this block, women in labor assessed the intensity of the pain syndrome on a numerical rating scale at 4–5 points [30]. Thus, the effectiveness of this technique requires further study.

A case of using a posterior block of the quadrant lumbar muscle in a woman in labor with hemophilia was also described [31]. This article provides details on the use of the third type of QLB, in which the anesthetic is injected in front of the quadrant lumbar muscle in the area where it reaches the transverse process of the fourth lumbar vertebra. In this type of QLB, the anesthetic spreads between the quadrant lumborum and the psoas major. With this approach, a classic trefoil is visible: the transverse process of the fourth lumbar vertebra looks like a stalk, the psoas major muscle is the anterior leaflet, the extensor muscle is the posterior leaflet, and the quadrant muscle is lateral leaflet [32, 33]. It should be noted that QLB is used as an effective method of pain relief in the early postoperative period after caesarean section [34–39], gynecological operations, primarily after hysterectomy [40], resection of the small [41] and large intestine [42, 43], nephrectomy [44–46], gastrectomy [47], hernioplasty [48, 49]. Quadrus abdominis block has been described after bifemoral shunting [50] and during operations on the lumbar spine [51, 52]. All authors showed in their works high patient satisfaction with the quality of pain relief after performing this block (patients noted a significant decrease in the intensity of the pain syndrome). However, we found a description of only 1 case of the use of QLB in childbirth in the literature available to us. At the same time, the authors note that the woman was satisfied with the quality of anesthesia [31]. However, the possibility of using this blockade for labor pain relief also requires further study.

There are alternative regional methods of labor pain relief in cases where the use of epidural analgesia is contraindicated. All of the above blocks are required to be performed bilaterally using ultrasound navigation for effective labor pain relief, although ESPB has been described monolaterally for labor pain relief [30]. In the literature available to us, we did not find descriptions of additional sedation for performing the blockades described in the review, which most likely indicates that these manipulations do not cause significant discomfort to the patient. At the same time, it is worth noting that some of them (such as paravertebral blockade, pudendal blockade) are better studied than QLB or ESPB. Which of these techniques can become a comparable alternative for labor pain management remains to be seen.

Funding source. This study was not supported by any external sources of funding.

This website uses cookies to improve your experience while you navigate through the website. Out of these cookies, the cookies that are categorized as necessary are stored on your browser as they are essential for the working of basic functionalities of the website. We also use third-party cookies that help us analyze and understand how you use this website. These cookies will be stored in your browser only with your consent. You also have the option to opt-out of these cookies. But opting out of some of these cookies may have an effect on your browsing experience.
Necessary Always Enabled
Necessary cookies are absolutely essential for the website to function properly. This category only includes cookies that ensures basic functionalities and security features of the website. These cookies do not store any personal information.
Non-necessary
Any cookies that may not be particularly necessary for the website to function and is used specifically to collect user personal data via analytics, ads, other embedded contents are termed as non-necessary cookies. It is mandatory to procure user consent prior to running these cookies on your website.
SAVE & ACCEPT
Insert math as
Block
Inline
Additional settings
Formula color
Text color
#333333
Type math using LaTeX
Preview
\({}\)
Nothing to preview
Insert